Aston Martin Vanquish: Worth it 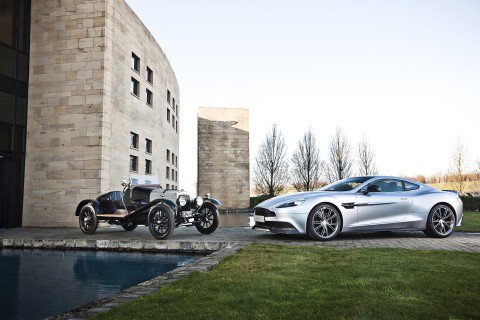 Britain’s most iconic car manufacturer celebrates its centenary in 2013. Autocar takes a look back the history of Aston Martin

Originally incorporated as Bamford & Martin, Aston Martin was founded by Lionel Martin and Robert Bamford on 15 January 1913. The name was changed in 1914 after their early cars successfully campaigned the Aston Clinton hillclimb in Buckinghamshire.

The Chelsea-based the company earned a reputation as providers of sports machines for racers and enthusiasts. 1926 saw the firm compete in the French Grand Prix, with two cars successfully completing the race.

It was under David Brown, the British industrialist who acquired Aston Martin in 1947, that the firm produced some of its most well known cars. The first car to wear the DB monicker, the DB2, entered production the same year and was followed by the DB3, DB4 and DBR1 race car in 1957, after the company relocated to Newport Pagnell.

In 1960 Aston Martin joined forces with Italian coachbuilder Zagato to create the DB4GT Zagato, a highly modified and exclusive car, which started a series of bespoke design creations that continues to this day.

International brand awareness arguably didn’t arrive until 1963, when the newly lauched DB5 took a starring role alongside Sean Connery in Goldfinger. Since then Aston Martin cars have forever been linked with the film franchise, despite some Bond switching allegiance to Lotus and BMW as time went on.

1972 saw a change of ownership and the launch of the V8. A complete style overhaul for the brand, the V8 held the standard for British motoring in a performance car scene increasingly dominated by the Italians, namely the Ferrari Boxer and Lamborghini Countach.

Just three years later, Aston Martin changed hands again, this time bought by a consortium which sought to change the company’s fortunes by reviving the Lagonda brand, which Aston Martin had acquired in 1947. The striking Aston Martin Lagonda was the result – a forward thinking car, with unique styling and a dashboard complete with touch-sensitive buttons and electronic displays.

Unfortunately, due to ever spiraling costs and a lack of reliability, the Lagonda was a commercial flop and Aston Martin once again underwent a change of ownership, and was bought by Pace Petroleum, with Ford taking full control by 1993.

Ford resurrected the DB model line with the svelte DB7, the car that started the current Aston Martin design theme. Originally launched with a six-cylinder 3.2-litre engine, it was intended to sit as an entry-level model below the 1988 Virage, but became the flagship model with the introduction of a 5.9-litre V12 in 1999. With over 7,000 units produced, the DB7 is one of the most popular Astons in the marque’s history.

When the DB9 was launched in 2004, its crisp styling and sheer modernity instantly rendered the DB7 old hat. Its platform has been shared by every V12 Aston Martin since, from the short lived Virage to the current flagship model the carbon-bodied Vanquish.

2009 saw the introduction of the One-77, Aston’s first bespoke supercar. With 750bhp from a 7.3-litre V12, the One-77 was the most powerful naturally aspirated car in the world at the time of its launch. As its name suggests, only 77 were produced and cost £1.4 million.

At the other end of the performance scale, the Cygnet caused controversy when it was unveiled in 2011. Essentially a rebadged Toyota iQ with modifications to both the bodywork and interior trim, it was launched by the company to bring down average CO2 emissions across the range, to comply with 2012 European regulations.

The future looks bright for Aston Martin, with a major stake being sold to the former owners of Ducati motorcycles. £500m is expected to be invested in new products, with a facelifted Rapide due to be unveiled next year.