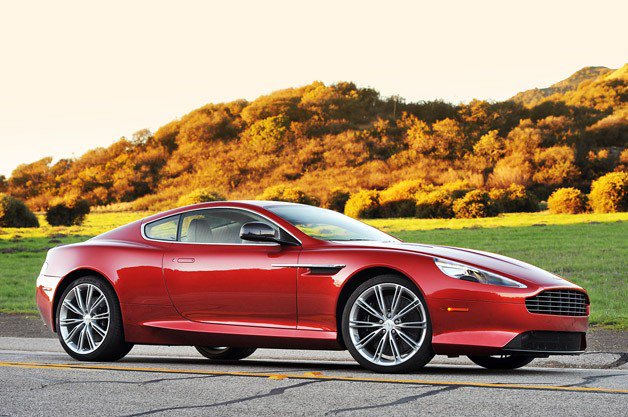 My neighbor had been ignoring the various exotics and high-priced luxury cars parked in my driveway for many years – I should have expected that the DB9 would shatter the trend.

The morning sun was glistening off the Aston Martin’s metallic Volcano Red paint when she rolled by in her late-model Acura TL, abruptly hit the brakes, and then reversed her sedan before coming to a stop in front of my driveway. The passenger window went down and she smiled before uttering seven words – a curious question followed immediately by an ardent statement.

“What is that car? It is gorgeous!”

There was no need to discuss the muscular twelve cylinders under the hood, yards of hand-stitched soft leather or its carbon-ceramic brakes. None of that mattered. As she peered at the sexy aluminum bodywork, her eyes filled with lust and then glazed over.

The Aston Martin DB9 is a sports GT – touted as its “most elegant sports grand tourer.” Despite sharing most of its sibling’s dimensions, the all-aluminum DB9 is slotted below the carbon-bodied flagship Vanquish and above the slightly smaller and sportier Vantage.

With the short-lived Virage now out of production, the DB9 went under the knife for the 2013 model year. It emerged in late September with a more aggressive and athletic appearance (Aston says that 70 percent of the body panels are new), fresh technology and a solid bump in power.

The new 2013 DB9 is a dead ringer for the discontinued Virage from the front, as it has adopted the coupe’s sharpened and elongated front lights, LED markers and daytime running lamps, along with its gaping lower intake with a carbon-fiber front splitter. The lower rear fascia is also nearly identical, with a more prominent lower diffuser styled to emphasize its aggressiveness. In a departure from the Virage with its smooth tail, the rear decklid of the DB9 features a handsome boot “flip” (we call it an “integrated spoiler” in the States) to further reinforce its sporty demeanor and reduce lift. 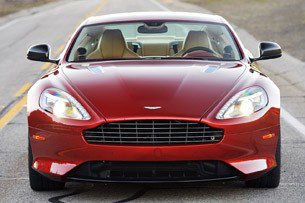 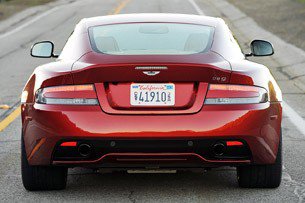 The interior ergonomics are unchanged (it’s a shame the DB9 doesn’t get the updated and slightly more ergonomic cabin from the flagship Vanquish), but the DB9’s accommodations have been upgraded and improved to be more luxurious, more refined and more elegant. Supple Bridge of Weir hides, wonderfully hand-stitched with two different gauges of thread depending on the desired aesthetic effect, embellish all of the visible surfaces and real polished glass switches adorn the console. A new “racetrack” pinstripe color-contrasting welt runs down either side of the console (each requires a six-foot continuous piece of leather, says the automaker). The cockpit is plush, comfortable and its rich smell will make your mouth water – Astons do that.

Mirroring the construction of the Vantage and Rapide, the DB9 is built on the company’s Generation 4 VH all-aluminum monocoque chassis. Affixed to the lightweight framework are aluminum body panels with magnesium alloy and carbon-fiber components. The proven platform is plenty stiff, and its foundation serves as the backbone for Aston Martin’s third-generation three-mode Adaptive Damping System (ADS). The suspension is comprised of double-wishbones, coil springs, anti-roll bars and electronically controlled monotube dampers at both the front and rear brakes, massive carbon-ceramic discs with six-piston calipers in the nose and four-piston calipers in the tail, are shared with the Vanquish, while the standard wheels are 20-inch alloys wearing Pirelli P-Zero rubber (staggered 245/35ZR20 and 295/30ZR20). The steering is Servotronic, speed-sensing rack-and-pinion with traditional hydraulic power assist.

As expected, the DB9 boasts Aston Martin’s 6.0-liter (technically 5,935cc) V12 under its alloy hood. Naturally aspirated, the AM11 engine has been bumped 40 horsepower over its predecessor to deliver 510 horsepower at 6,500 rpm and 457 pound-feet of torque at 5,500 rpm. Unlike the smaller Vantage that’s fitted with a single-clutch automated or a traditional six-speed manual gearbox, the larger coupe arrives with the automaker’s rear-mid mounted six-speed Touchtronic 2 automatic transmission, and a mechanical limited-slip differential is standard.

Dimensionally, the DB9 and Vanquish are nearly identical. However, the substitution of aluminum body panels for carbon fiber means this less expensive coupe tips the scales at a slightly heavier 3,935 pounds (compared to 3,833 on the Vanquish). The addition of a hundred pounds only slightly affects acceleration, as the updated DB9 will still crack the benchmark 0-60 sprint in less than 4.5 seconds and see 183 mph at the top end. It is plenty quick for its mission.

Base price of Aston Martin’s 2013 DB9 is $187,515 (including the mandatory $2,115 destination and $2,100 gas-guzzler tax), which represents a price cut of $4,515 over its predecessor. While a slightly more attractive Monroney isn’t going to convince anyone to take the British coupe over its closest Italian rivals (the Ferrari California starts at $194,000 and the Lamborghini Gallardo stickers at $184,895), it does create a larger gap between the DB and the Vanquish. That is Aston’s true intent, after all.

Standard equipment includes the aforementioned hand-stitched upholstery, satellite-based navigation, front and rear parking sensors, Bluetooth and an iPod connector. Our test model was also optioned with the upgraded Bang & Olufsen audio package ($8,330) and four unique ten-spoke Silver Diamond Turned wheels ($3,785) for a grand total of $199,630. Keep in mind that the base price of the 2014 Vanquish is about $100,000 higher. 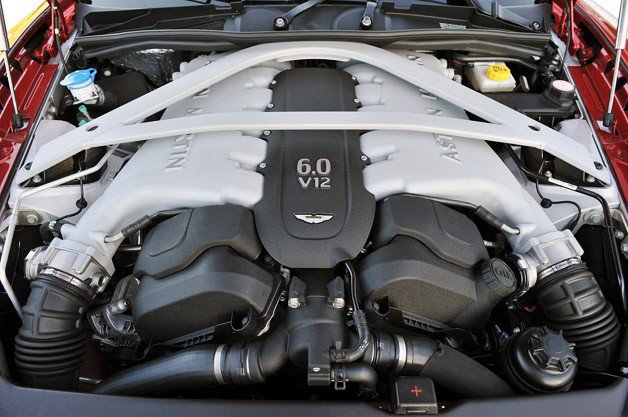 The relationship between Aston Martin’s DB9 and Vanquish is about the same as that between the BMW 550i and M5 – one is designed for touring, while the other would rather stretch its legs on a proper racing circuit. With that in mind, the DB9 does everything about eight-tenths well as the Vanquish, yet Aston’s engineers have meticulously ensured that its performance envelope won’t be giving its flagship sibling any paper cuts.

After dropping into the driver’s seat and obtaining a contact high from the aromatic leather hides (deep breath, hold and then repeat), I spent a moment looking around the upgraded cabin. Whether or not your personal tastes prefer the contrasting upholsteries, the cabin of our test car looked genuinely regal. And it was more than just appearance, as the fit, finish and every touch point added additional justification to its sticker price. The DB9 is far more coin than your little ceramic piggy bank will hold, but the splendid cabin does its best to justify the investment.

Compared to the Vanquish, of which I had time to enjoy on a racing circuit outside New Orleans two weeks prior, the DB9 sounded downright docile when its engine was primed and fired. The basic engine architecture is the same, but the DB9’s exhaust system is more restrictive and doesn’t have the electronic flapper that provides a satisfyingly throaty growl at the touch of a button. Nevertheless, the V12 purrs as smoothly as a pleased kitten at idle.

The mechanical hand brake, located to the side of the driver’s left thigh, is lifted and then released for disengagement. Like most modern Astons, the electronically controlled transmission is commanded by round glass buttons located at the top of the center console (P, R, N and D). Three other round glass buttons, at the bottom of the console, control suspension damping, the transmission’s Sport mode and stability control. To the right of the last button, maintaining visual symmetry on the console and looking much like a miniature joystick, is a stainless-steel Aston Martin pen.

Don’t ever question the V12, as it is a burly driving partner that’s always ready to flex its muscle. Punch the throttle and the DB9 will satisfyingly light up its rear tires on most pavements while its exhaust delivers a resounding bellow. It’s not silly quick, like a Porsche 911 Turbo or even a Lamborghini Gallardo, but it provides a punch that pushes occupants back in their seats and delightfully holds them firmly. Unlike the Vanquish, however, the DB9 does not offer launch control.

A traditional torque-converter transmission is becoming something of a rarity in performance cars these days, but the DB9 is a true GT. That taken into consideration, the Touchtronic 2 gearbox does a better job at being smooth than it does at being sporty. For best interaction, use the column-mounted paddles (still too small to grab during spirited maneuvers), but keep in mind that a torque-converter gearbox won’t ever deliver neck-snapping shifts. Flooring the accelerator on the highway also takes a short second for it to drop a couple of gears. Thankfully, the V12 makes enough torque to mask most of the transmission’s shortcomings.

I tried the ADS on each of its three suspension modes (Normal, Sport and Track) and found all a bit too stiff for my liking. The DB9 rode unexpectedly firm, and I am not blaming the large wheels or low profile tires. The three suspension settings should be named “Firm, Firmer and Firmest.” While not exactly a kidney-killer, the ride did catch most passengers off guard. As expected, body roll is minimal, regardless of the setting.

On the open road, the DB9 felt almost underutilized. Thanks to an abundance of power, the two-door calmly maintained any speed I asked of it. The cabin was reasonably quiet at cruise (tire rumble, from the large contact patches, is most evident), yet few occupants will want to hear tire treads slapping against the pavement when the optional 1,000 watt Bang & Olufsen Beosound audio package is but a twist of the knob away. I’m no audiophile, but my ears consider it one of the best OEM automotive sound systems on the market today.

Even though I felt the ride was firm, its tuning does contribute to the coupe’s athleticism. I took the DB9 into the Santa Monica Mountains to play one afternoon and it was happier than an unleashed Sheltie at a dog park. Broad sweeping corners were its expertise, as it swallowed mile after mile of black asphalt effortlessly. Turn-in and agility weren’t as sharp as the lighter and more purpose-built Vanquish, and its carbon-fiber sibling is definitely quicker on the throttle, but the two-door was much more capable than anything I saw that day. I’d be surprised if any owner ever finds its limits on public roads.

The steering feel was excellent, nicely weighed, and I never put a wheel more than an inch off line. Braking was also effortless, as the carbon-ceramic rotors laughed at everything I could throw at them (note: the brakes did exhibit the characteristic “brushing” noise at low speeds). Only when the roads became very tight did the DB9 push back in protest to remind me of its size – it drives much bigger than the Vantage.

And that brings up a very important observation. 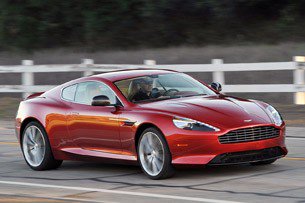 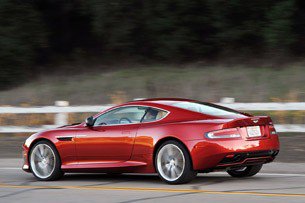 One thing Aston Martin has done unquestionably well is draw very distinct lines between its Vantage, DB9 and Vanquish, both in terms of performance and driving dynamics. Even though most casual observers will never have the opportunity to drive each back-to-back – who am I kidding, most people can’t even tell them apart visually – their personalities are as unique as the three defined flavors of Neapolitan ice cream.

The Vantage is definitely strawberry. It is immediately sweet and satisfying but with a slightly bitter edge – its character is fresh and fun and its driving dynamics are refreshing. The Vanquish is chocolate. The flagship is rich, complex and distinctive. Not to be taken lightly, it requires an experienced connoisseur to understand precisely how to enjoy it.

The remaining flavor is vanilla, of course. Unlike sweet strawberry or rich chocolate, both of which satisfy only select individuals, the DB9’s disposition is one of well-rounded smoothness with a savory taste that is pronounced, yet balanced and pleasing. It is complementary, refined and insatiably delicious to consume – it is well-liked and universally enjoyed.

One week after the stunning Aston Martin had left my driveway I was out front washing another vehicle that I was set to review. My neighbor slowed and rolled to a stop once again. The Acura’s window went down, and she yelled, “I miss the DB9!”