Aston Martin DB9 – The Best Of British in a Sports GT 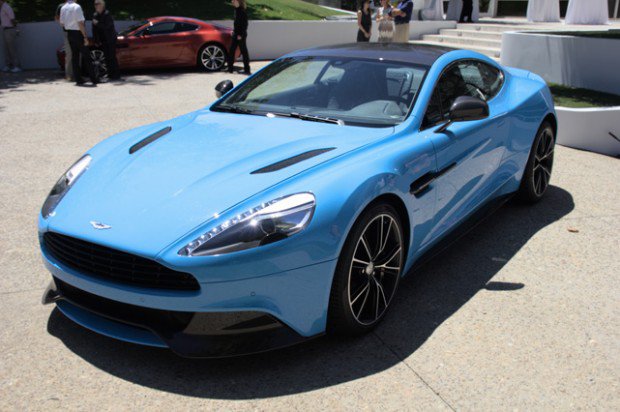 I’ll admit it: I’m really excited for Aston Martin to bring back the Vanquish name plate. I’m bored of the alphanumeric names and, as the proud owner of a 2003 model Vanquish, I’m happy to see the continuation of the moniker. Yesterday, the kind folks at Galpin Aston Martin invited me to an exclusive preview of the first production Vanquish to hit these shores, at a completely over-the-top Malibu estate. Joining us were Aston Martin’s CEO, Dr. Ulrich Bez, and design director Marek Reichman, who gave a thorough walkaround of the new car.

Mr. Reichman told us of the “golden ratio” of 1/3 to 2/3, and how all Aston Martins are recognizeable as relatives because they all adhere to this principle. For instance, the vertical dimension of the grill is exactly 1/3 the size of the distance it sits from the ground. The height of the side windows are also exactly 1/3 the size of the measurement from the doorsill to the ground. There’s length to height, width to height, and more, and this theory can be applied all over the car and be accurate to within a centimeter, every time. There’s no doubt that the new Aston is gorgeous, with styling cues from the old Vanquish, the One-77, and the DBS, but with a new and improved interior, Garmin navigation software (instead of the old, awful Volvo system), and a body largely made of carbon fiber, which allows for not only lighter weight (it weighs some 250 kg less than my Vanquish), but also much more complex shapes which wouldn’t be possible with Aluminum. One example, of this is the trunk lid, with its integrated spoiler. Under the hood is a heavily re-worked version of the 6.0L V12 engine, producing 565 horsepower and 457 lb/ft. Sadly, no manual transmission will be offered, but Dr. Bez says this transmission, despite its torque converter, will shift in 100 milliseconds with virtually no interruption in torque.

We can’t wait to do a full review of this new Vanquish (and who knows, we may have to do a side-by-side with my own personal car), but we were treated to a sample of the one thing that stands out to me as the best facet of the Aston Martin experience: the sound. My Vanquish is one of the best sounding cars I’ve ever driven; like a really pissed off jungle cat. It crackles and pops when it shifts, and puts an instant smile on your face, even though the transmission makes it feel outdated. The new car sounds even better, making no fewer than five distinctly discernable noises.

Hit the jump to see and hear Dr. Bez rev the absolute shit out of the new Vanquish, as well as a gallery showing the many, brilliant angles.