No, Mr. Bond, I Expect You to Vroooooom
dehaze
GALPIN ASTON MARTIN

No, Mr. Bond, I Expect You to Vroooooom

No, Mr. Bond, I Expect You to Vroooooom

In ‘Skyfall,’ James Bond is back in the iconic 1963-65 silver-birch Aston Martin DB5. I do hope the world is in no big hurry to be saved.

Bond’s automotive anachronism can’t go unchallenged. The DB5 was a hot piece in its time: the in-line six punched out to 4.0 liters, triple SU carburetors, a German transmission and a superleggera magnesium-alloy body, which is pretty OMG. The coachwork is sculpturally perfect, the stance heroic, the car’s presence as cutting as a sword of ice.

But by modern standards, the 282-horsepower, five-speed DB5 is markedly leisurely motoring. Actually, the average late-model minivan could run it down. Oh, you wanna go, shorty? Anybody ever tell you look like Deputy Dawg?

It’s not like I don’t appreciate the DB5, a suave, powerful and exclusive car with few rivals in its era, the Facel Vega Facel II and Ferrari Lusso among them. Sir David Brown should be buried in Westminster.

Still, I marvel at this automotive disarmament of Bond’s. Is he in some nutty British car club we didn’t know about? You know, Bond? Beefy guy, works for the government, owns two Morgans?

What if, instead of the blazing cyborg superpistol that Bond carries in “Skyfall” (a 9mm Walther PPK/S), we hand him the tiny Walther PP from “Dr. No,” an archaic, yapping popgun, something a massage-parlor manager would carry? What if we took away his mobile and made Bond use pay phones?

Is it a magical Aston? That opens up some narrative possibilities. The car is actually older than Daniel Craig (born 1968). Maybe it’s the Elder Wand. 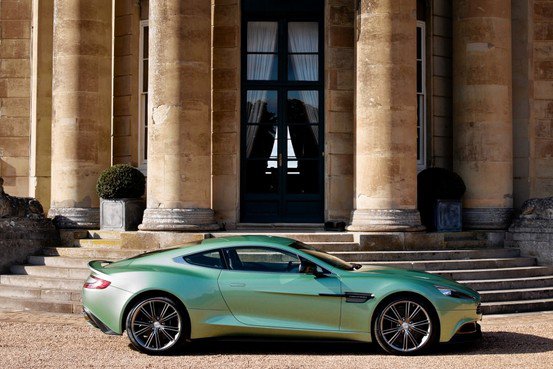 My point is, it means something. The value of Bond screen time is measured in millions/sec. It is one of the most closely calculated sums in big media. For Aston to use its allotment of utterly indispensable global messaging to promote a cramped, dead-slow, half-century-old jalopy, a car still reeking of Sean Connery, well, it means something. At a minimum, it means some of the slowest car-chase scenes in recent memory.

And speaking of canned goods: Why isn’t Bond driving the 2014 Aston Martin Vanquish, the latest and most contemptuously awesome of the company’s aluminum-chassis, front-V12 grand tourers? (Yes, 2014—the marque aims to get maximum shelf life out of its model years.) I took one of Aston’s $300,000 flagships for a drive in the Buckinghamshire countryside a couple of weeks ago, and for that I would like to now apologize. It got kind of loud.

But what an agreeable beast this is. Sleek, roguishly aristocratic and gallingly fast, the Vanquish represents another 100 or so man-years of development applied to the Aston template. Aston’s familiar aluminum structure technology—castings and glued/riveted extrusions, mostly—is here draped in aerospace-quality carbon-composite panels (the 2001-07 Vanquish used superformed aluminum body panels).

Carbon body panels are difficult to paint, so Aston developed a perfecting, glasslike silica coating for a prepaint. The finish on my test car could be measured in fathoms.

The Vanquish looks like a light-heavyweight boxer sewn into his own waistcoat. The fitted tension in the lower fuselage, the sucked-in, negative spaces ahead of the rear wheel arches, are spectacular. The Vanquish draws some of its blood-vent styling, the side strakes, from the company’s limited-edition One-77 project. The Vanquish’s proportions aren’t quite as radical and cab-rearward as those of the One-77, but it’s still pretty much a heart attack on sight. Among the flourishes is the Vanquish’s rear-spoiler hoop that, being made of carbon composite, required a unique and proprietary tooling process. 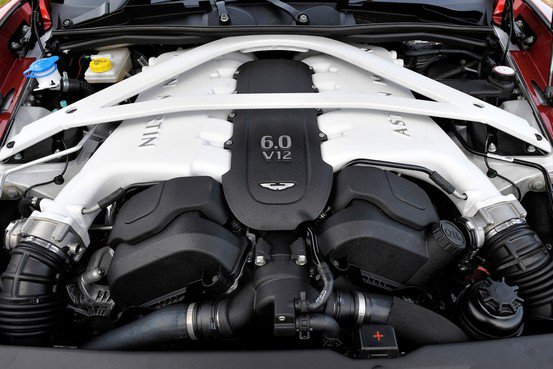 Other bullet points for the 2014 Vanquish include an additional 55 horsepower (565 hp at 6,750 rpm) and 37 pound-feet more torque (457 pound-feet at 5,500 rpm) over the DBS. Aston’s all-alloy 5.9-liter, mid-front-mounted V12 gets a sprucing up with variable timing on both intake and exhaust sides, as well as freer-breathing intake geometry.

Meanwhile, the Vanquish features an even more ominous, impudent exhaust note. Any time the revs rise past the thresholds for the exhaust bypass valves, the Aston’s sound transforms from a somewhat truck-y thud to a concussive, fiery staccato. The off-throttle overrun sounds like ripped bodices flapping on a flagpole.

Refinements over the DBS—the Bond car in the last two movies, incidentally—include a 25% increase in torsional rigidity, says the company, and about a 150-pound reduction in curb weight, which comes in around 3,850 pounds. With the car transferring power to the ground through a single-clutch mid-rear transaxle, the Vanquish doesn’t cycle through gear ratios with quite as much impact as a car with a dual-clutch automatic manual transmission, the Ferrari V12, for instance, which also enjoys a 165-hp advantage. With the new-for-2014 launch-control system, the Vanquish is probably capable of hitting 60 miles per hour in about four seconds, as compared with the Ferrari’s three flat.

But once the Vanquish is rolling and the road opens up, the sheer, horsey power of the thing is a joy. Romp the throttle at mid-rpm in third gear and you’ll get a huge, hydraulic shove in the back, like God has hit you with a water balloon. Sploooff!

For a grand touring car, the Vanquish can get downright flinty in the suspension (the 20-inch, no-profile Pirellis don’t help). Sprung with double wishbones, coil springs and adaptive monotube dampers, the car offers a choice of three drive modes—Tour, Sport and Track—with escalating thresholds for the car’s engine, transmission, suspension and stability logic. My recommendation is the Tour setting, which allows for a comfortable though quite vivid ride.

The car’s steering (hydraulically assisted) is obviously highly developed, keen and responsive, and yet well short of dartiness. The Vanquish is at its absolute best tracking straight and true at high speed, an avenging spirit with diamond eyes. The brakes, as near as I could tell, would stop a train: Dazzling 15-inch-plus ceramic discs beam through the wheel spokes.

The one gripe I have with these cars—the center stack and the navigation display—remains unresolved. While the climate and audio controls have been given a techy updating—with peculiar, mini-donut-like rotary dials for climate and audio functions—the navi display remains small, faraway and low-res, integrated into a pop-up panel atop the dash. It’s the one dissonant element in a cabin that’s just insane with quilted Alcantara and stitched leather.

Look, I’m all for suspending disbelief. It’s fun (every time Bond flashes his Omega Seamaster Planet Ocean 600M in “Skyfall,” down a shot). But I’m just not buying Bond’s return to the DB5. If my job routinely involves running gunbattles and desperate escapes, I’m going to want heavier tackle.

That, the Vanquish is.