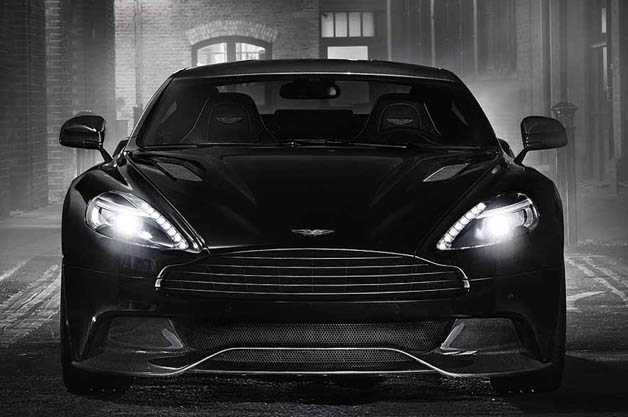 Aston Martin and tuxedos go together like gin and vermouth, but those looking for that extra degree of formality need look no further than the British automaker’s Carbon editions. Aston has bestowed the blacked-out treatment on the Vantage, DB9 and DBS, and has now turned its attention to the flagship Vanquish.

The new Vanquish Carbon Edition is being offered in coupe or convertible form, in either black or white. Based on the recently upgraded model with its new eight-speed paddle-shift automatic transmission, the Vanquish Carbon Black offers the same 6.0-liter V12 with 568 horsepower and 465 pound-feet of torque, good for a 3.6-second sprint to 60 and a top speed of 201 miles per hour. What sets it apart from other Vanquish models is its special trim, including black window surrounds, blacked-out headlight trim, 10-spoke gloss-black alloys and an interior decked out with herringbone carbon-fiber trim, anodized black speaker grilles for the Bang & Olufsen audio system and available quilted leather upholstery.

We’re waiting for the full details to be released, so watch this space. In the meantime, you can scope out the microsite and the dramatic video clip for a closer look at Aston’s latest flagship in either Darth Vader or Storm Trooper treatment.

Written by Noah Joseph for Autoblog.com