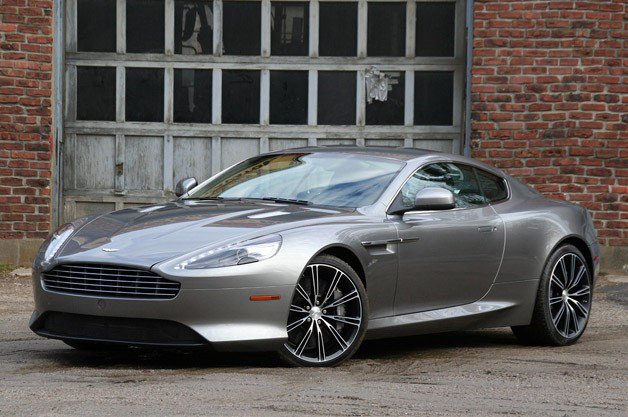 We Bond With Gaydon’s Gorgeous Tweener

The Virage, as you know by now, is the newest Aston Martin, resurrecting a moniker last used on a series of the British automaker’s V8 cars from the late ’80s to 2000. Today’s Virage is not part of the current V8 Vantage line, however. It’s a “tweener” V12 model that slots above the DB9 and below the DBS. Like them, it’s built on the automaker’s aluminum-intensive VH architecture and draws power from a 6.0-liter V12. True to its spot in the hierarchy, the engine’s 490 horses stake the middle ground between the DB9’s 470 and up to the DBS’s 510. The Virage’s 420 lb-ft torque rating equals the DBS and trails the DB9’s 442 lb-ft.

Rain-soaked and finished in Tungsten Silver, the Virage looked as if it had been plucked from a shark tank and deposited in front of my office. Sleek and menacing, herds of New Yorkers rushing to lunch as they dodged the raindrops uniformly paused to give the big coupe a look before shuffling along. Later in the weekend, the Virage created another sensation at the local car wash, as patrons and staffers alike reached for their phones to take snapshots of the car. Everyone wanted to know what it was, and then they simply wanted it. I think that there’s a photo of the Aston tacked to the establishment’s wall now.

One person unhappy to see the Virage was the attendant at the first Manhattan parking garage I drove it to. After sizing up the car and realizing what it was, he refused to so much as touch it, much less park it. $232,905 in the metal can be intimidating that way. After doing what felt like a 19-point turn to get the Aston turned around in the tight confines, I could actually sympathize with the guy. I took it to another garage I regularly use, where the smiling attendant (who initially mistook the Virage for a Jaguar) drove off into the bowels of the facility, the V12’s exhaust note echoing off the walls as the car disappeared.

The Virage’s interior is mostly clutter-free. Unlike the similarly priced Bentley Continental GT, the Aston doesn’t bother with a multifunction touchscreen that dominates the center stack. Instead, you get a small radio display and an assortment of dials and buttons to operate the audio, HVAC, navigation, and communications systems. Basic everyday functions are intuitive, but some tasks that require a little digging through sub-menus seem needlessly complicated, like pairing a Bluetooth phone.

As tech options go, this Virage arrived outfitted with the optional Bang & Olufsen BeoSound Virage audio system, a $8,000, 1,000-watt, 13-speaker setup, complete with party-trick motorized tweeters that rise from the dash. It’s sensational. Rob Halford’s high notes have never sounded better. Also new for 2012 is an updated nav system, powered by Garmin. Its user interface is straightforward, the maps are clear, and it’s all tucked out of sight under a hideaway panel atop the center stack, visible only if you need to use it.

Fit and finish is off the charts. The ambiance is ultra premium, but it’s not delicate, either. The feeling is that this is a car that wants and expects to be driven, and there’s a distinct solidity to the controls and surfaces you’ll interact with frequently. Basically, everything you touch is leather, aluminum, glass, or Alcantara. A friend who came over for a ride climbed into the passenger seat and immediately commented, “Finally, leather seats that actually smell like leather.”

As you’ll see in the photo gallery, this tester was set up with 2+2 seating. The front seats are firm, but not punishing, and it’s not hard to settle into a comfortable driving position. The seat heaters are powerful, too. While the Big Apple’s winter has been a pretty boring weather-wise, it was chilly the weekend the Aston visited, and the quick warmers were appreciated.

As in other modern Astons – Rapide included – the back seats are hilariously useless – perfectly sized for one’s miniature pet giraffe, but not much else. They’re not even kid-friendly (no LATCH). I actually climbed back there, or tried to, but decided that it would all end with orthopedic surgery and aborted the mission. So when you win Powerball and order your Virage, choose the backseat delete option.

Open the Virage’s long hood, which weighs next-to-nothing, and you’ll find the 6.0-liter V12. The engine’s location, pushed as far back as possible, serves as a visual reminder that the Virage boasts perfect 50/50 weight distribution. A plaque mounted on the black panels covering the space ahead of the V12 communicates the car’s handbuilt status and the name of its final inspector before it left the line at Gaydon.

When it’s go time, press the weighty crystal key fob into its dashboard receptacle, and it flashes red as the V12 springs to life. The transmission controls are arranged on glass push buttons across the top of the stack, flanking the key fob. Gimmicky? Yes, but the upside is that the center console has plenty of storage space where the shifter and handbrake (the latter is on the floor to the left of the driver’s seat) would generally reside. 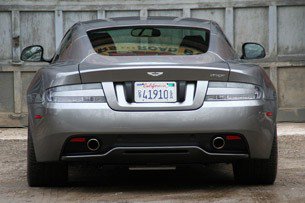 Press D, and you’re off. With the windows up, there’s not much aural cabin intrusion from the 12-cylinder. The six-speed automatic is more fun to shift using the magnesium paddles (this is as involved as you can get, since a manual gearbox isn’t offered). For optimum enjoyment, roll down the windows and savor the racy barks and snarls you’re able to summon. It’s very satisfying. The Sport mode (just press the eponymous button on the console) delivers quicker shifts, and it also seemed to sharpen up the throttle response – like me, you’ll probably want to use this setting almost exclusively.

The Virage’s sleek profile belies its 3,935 pound curb weight, but the car feels lighter on its feet than that number suggests. A combination of excellent rigidity, perfect weight distribution, and steering that’s ideally weighted and communicative will have you seeking out the most engaging roads you can find. The standard Adaptive Damping System does a good job balancing ride comfort and handling. For the most part, it leans toward the former. Even on cobblestone streets, the Virage’s suspension doesn’t punish. Firmer settings can be had with the press of another instrument panel button, but under normal driving conditions, it’s unnecessary to do so. 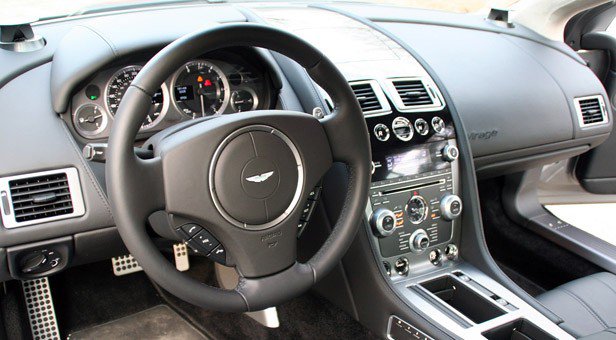 Likewise, the gigantic carbon ceramic brakes (16.6-inch, six-piston units in front, 14-inch discs and four pistons back) are wonderful, but they’re overkill in the real world, where a 2005 Toyota Camry camped in front of you is equally effective at slowing the Virage. On the highway, the Virage is happy to gobble up road and make, shall we say, very good time. You won’t regret setting the alarm to leave the house early, while traffic’s still light.

Nowadays, a car like the 2012 Aston Martin Virage has loads of competition across multiple tax brackets. The Bentley Continental GT costs basically the same money, offers more power, all-wheel drive, and is a more overt statement of one’s baller status. The Jaguar XKR-S will save you a hundred grand, also drips sex appeal, and has over 500 horsepower. Finally, the Cadillac CTS-V will rip the heads off the aforementioned, guzzle their blood, and is priced so that for what the Virage costs, you can order up one in each bodystyle and still have a Zero Halliburton case of cash left over.

The lesson learned is that ultimately, the Virage illustrates how little any of all that matters. Buyers are of sufficient means that the value proposition is irrelevant. Bench-racer arguments are equally gauche. This is a statement car, more elegant and stylish than its competition, with enough power and agility to hold its own against them. If you want to win a race, there are better choices. Want to win hearts and minds? Show up in the Aston Martin.