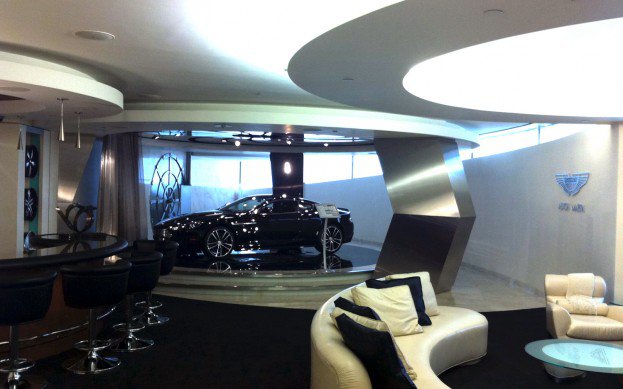 While dropping off a long term vehicle at Galpin Motors for routine maintenance, Executive Editor Ed Loh and I were offered a nickel tour of the pristine facilities by service advisor, Carlos Ponce. Being the curious car nuts that we are, we couldn’t pass up the opportunity to get an inside peek at one of the West Coast’s biggest and oldest dealers.

Each of the Premier brands touted a cordoned section complete with intricate displays and shiny new models sitting on custom-built pedestals. It was on the Aston Martin leg that we were taken aback.

“Right this way,” Carlos said as he pointed to what looked like a steel wall. Ed and I shrugged our shoulders, prepared our iPhone cameras, and followed. With the swipe of a keycard, the cylindrical Sub-Zero refrigerator silently slid right to reveal an expansive, sexily-lit backroom. This wasn’t just any secret room. It was a palatial space adorned with leather-wrapped walls, giant LED TVs, a fully-stocked bar, and supple couches. The roof’s design mimicked a giant jet turbine. A brand new Aston Martin DBS sat stationary in the middle of it all.

Behind the car stood a wall with an enormous eight-foot-tall “safe” that led into another room where a set of Rapides and a V8 Vantage Roadster resided. Another door away was a lineup that included nearly every model in Aston’s range, save for the One-77 and new Virage. A Ferrari California and Audi R8 joined the party too. Had we been introduced to Bond’s secret LA lair?

In reality, it’s where potential Aston Martin buyers and current owners pass time while paperwork or small service is performed. The space is also used for small events and parties. Galpin calls it Club Aston. We call it Beyond Cool. No matter your reason for being there, you immediately feel hip and classy upon entry. We just needed martinis in our hands and Victoria’s Secret models at our sides to look the part.

We think Bond would approve.